While cleaning out our pantry of expired food, we cam upon a can of cashews that was around during the first four years of the W. administration... It had a hitchhiker. About a thousand really. THis was taken with the canon 100mm F2.8 Macro lens with a 580EXii flash with a homemade mini softbox, triggered with "Pocket Change Wizard" ebay flash trigger. 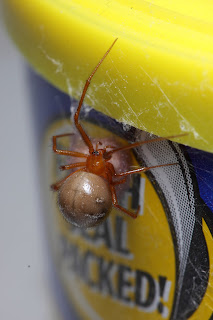 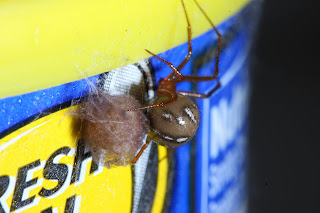 I can't say too much nice about this guy (girl) other than she has never sent me to the doctor... Which is less than I can say for this guy... 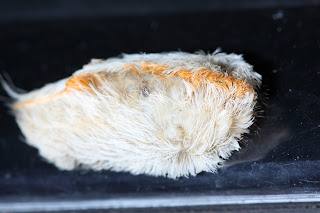 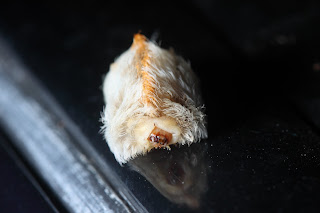 This thing that looks like a Wookie dropping looks to me like an Asp. It has the characteristic tear drop shape that denotes this hideous beast. He is about an inch long, and reeking with evil. I once knelt on a *piece* of one of these when we lived in Houston, and my entire leg swelled up. A family friend happened to be a doctor who opened up his practice late on a Sunday to give me a antihistamine shot. Yikes.. Very unpleasant.

I must say that I love macro photography. This particular lens gives a 1:1 magnification ratio on a full frame camera, and 1.6:1 on a crop body. That means that whatever the size in real lift, it can reproduce it at 1.6 times the size on my camera sensor. Since the Canon 50D has a 15.1 megapixel sensor, I can get a lot of magnification out of the system. Combine that with the homemade softbox that is about 6"x6" and you get some nice shots.. That doesn't sound big, but when your subject is an inch or less, that's HUGE.